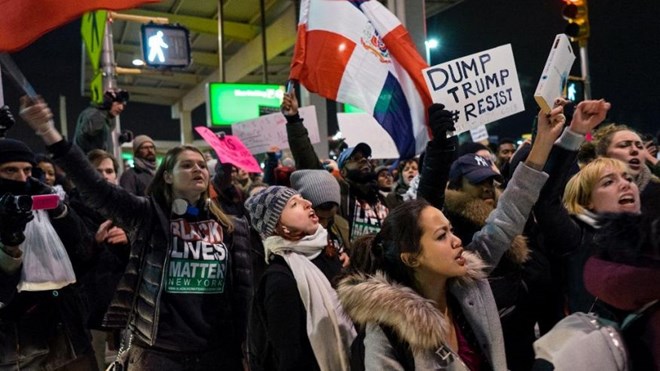 Countries targeted under a new US travel ban passed by President Donald Trump have attacked the move, along with the United Nations.

The order was presented as a means to strengthen US national security against terror threats.

On Tuesday however, two of the countries, Sudan and Somalia, said the move was unjustified.

The directive, which includes a 120-day ban on all refugees, takes effect on 16 March.

It follows a previous order, which was blocked by a federal court, that sparked confusion at airports and mass protests.

What the order means

Citizens of Iran, Libya, Syria, Somalia, Sudan and Yemen, six of the countries on the original 27 January order, are again subject to a 90-day travel ban

Iraq has been taken off the list because its government has boosted visa screening and data sharing, the White House said

Refugees already approved by the State Department can enter the US. An indefinite ban on all Syrian refugees is also lifted

Priority is not given to religious minorities, unlike the previous directive

“The fact remains that we are not immune to terrorist threats and that our enemies often use our own freedoms and generosity against us,” Department of Homeland Security Secretary John Kelly said on Monday.

Attorney-General Jeff Sessions said there were more than 300 refugees under investigation for potential terror offences, but no further details were given.

He said three of the countries on the list were state sponsors of terrorism and the other three had lost control of territory to militants such as the Islamic State group or al-Qaeda.

Not every country on the list has reacted to the new ban yet. Iran previously said it would stick with the ban on US tourists it introduced after the first ban. At the time, Iran called the decision “illegal, illogical and contrary to international rules”.

He said the estimated 150,000 Somalis in the US “have contributed to the US economy and the US society in different ways, and we have to talk about what the Somali people have contributed rather than a few people who may cause a problem”.

It was critical, he said, that Somalia continue to work to defeat the Islamist militant group al-Shabab. He was speaking at an event with UN

Sudan’s ministry of foreign affairs, meanwhile, spoke of its “deep regret and discontent” that a new ban was issued.

“Sudanese citizens have never been involved in any crimes or terrorism in the United States,” the statement went on to say.

The order also leads to a cut in the number of refugees the US has agreed to take in under a resettlement programme – from 110,000 this year to 50,000. The United Nations refugee agency said the US had traditionally been seen as a model of how to treat refugees – and that it was critical that this continue.

“This is the gold standard in refugee protection and a powerful model for all countries,” he added. “At a time of record-high levels of forced human displacement, this kind of humane leadership is needed more than ever.”