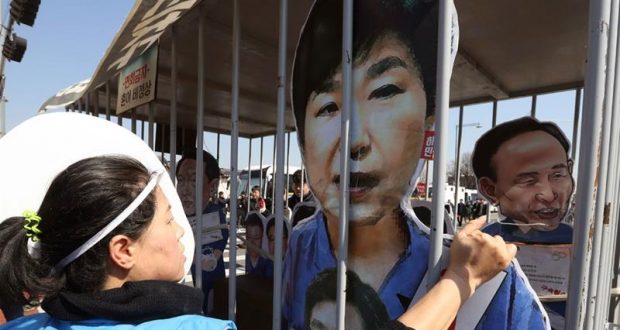 South Korean prosecutors on Monday indicted ousted President Park Geun-hye on multiple charges, including bribery, in the latest twist to a corruption scandal that rocked the country for months

Park was arrested and confined to a detention facility near Seoul last month on allegations that she colluded with a confidante to extort from businesses and commit other wrongdoing.

“Many people were expecting this to happen that she will be facing chrges and will be found guilt the moment she was detained some weeks ago,” Se-Woong Koo, a Korean politics specialist, told Al Jazeera.

“This has been a breathtaking moment in the South Korea politics, as we have seen this party dominating politics in the country, but with Park’s fall there has been a complete breakdown of this conservative faction.”

The prosecutors’ probe has already convulsed the country’s biggest conglomerate, Samsung Group, with its chief Jay Y. Lee under arrest for bribing Park and her friend, Choi Soon-sil.

All three are being held at detention centres. They have denied wrongdoing.
Park was also charged with abuse of power and coercion by pressuring big businesses to contribute funds to non-profit foundations.
Prosecutors on Monday also charged Lotte Group chairman Shin Dong-bin without detaining him.
Lotte has denied allegations that it made improper deals with Park, or those linked to her, for favours.