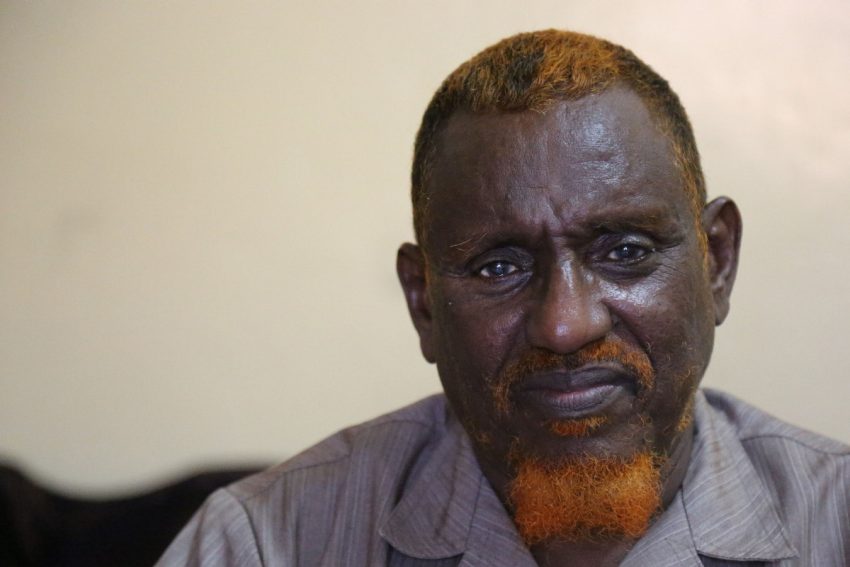 A man who has been called everything from a terrorist, a visionary, a clan elder, a religious scholar, a killer and a statesmen greets me on his driveway with a wave and a grin.

Sheikh Hassan Dahir Aweys seems eager for visitors. House arrest does not agree with those who pride themselves as leaders, not captives.

It has been a decade since our last interview in Mogadishu, when he was the spiritual head of the Islamic Courts Union (ICU), which the George W. Bush administration warned was “Africa’s Taliban.”

Aweys, listed both by the U.S. and United Nations as global terrorist associated with Al Qaeda, hasn’t changed much in 10 years; his face is relatively unlined for a septuagenarian, his beard still dyed vibrant henna red, his opinion that Somalia should be governed by Islamic law unwavering.

In an exclusive interview inside his home where he lives with some of his wives and 28 children, Aweys spoke at length about his history with the ICU, the Shabab and eventual split with the group’s leaders. A decade ago he could have shaped Somalia — today the country seems at a loss over what to do with him.

The conversation ranged from African geopolitics to religion and, as is so often the case in terrorism’s theatre of the absurd, the bizarre and personal. He wanted to know my marital status, was horrified that I did not have kids and said he wished he could offer me one of his. When he asked my religion and I hesitated, he started shouting, both accusingly and gleefully, “Atheist. Atheist!”

Ask Somali government officials or community leaders what they think of Aweys and the word most often used, also accusingly, is “stubborn.”

Which is one reason why Aweys, once one of Somalia’s most influential men due to his clan affiliation and militant pedigree, remains confined to his home in forced retirement.

The interview with Aweys was conducted while Obama was in power and before Mohamed Abdullahi Mohamed, known popularly as “Farmajo,” was elected Feb. 8 as Somalia’s president.

I had been granted rare access last year on the condition that the story would not be published immediately. There were sensitive diplomatic negotiations underway with Qatar at the time — reportedly to provide Aweys sanctuary in Doha.

Aweys ostensibly could face terrorism charges for his association with Al Shabab, but a trial is unlikely. He is a prominent member of Somalia’s influential Habar Gadir, a subclan of Hiwaye, and the previous government was unwilling to risk the backlash if he were prosecuted or, if found guilty, sentenced to death.

The talks with Doha have since broken down and, according to a Somali security official, Aweys remains under house arrest. He has been in government custody since his 2013 surrender, which followed months of negotiations with clan elders and government officials.

At the time he left the Shabab, the group’s executive was fractured and Aweys’ life was threatened by leader Ahmed Godane. American Omar Hammami, who was wanted by the FBI for a bounty of $5 million, was among those dissidents who were assassinated by Godane’s men. (Godane was later killed by a U.S. drone in 2014).

Aweys claims he was not a “member” but merely “associated” with Al Shabab. “There’s a difference between supporting them and joining them. We supported them in that they’re not our enemies, but I didn’t join them,” he said, leaning forward on his plastic lawn chair. “They used to fight with our enemies so we supported that. I disagreed with some of their actions though.”

Aweys had once ruled a breakaway Islamist faction known as the Hizbul Islam that fought against Al Shabab. But in December 2010, the two groups officially merged.

He said he condemned the group’s killing of civilians, citing friends whom had been victims. But that’s easy to say while under house arrest. During his years with the Shabab, the group launched some of their most devastating assaults, including the attack at Kenya’s Westgate Mall, which killed 67.

Aweys was one of the public faces of Al Shabab and he did not condemn the deaths of innocents at the time. When asked why, Aweys at first tells me he used to read Italian Marxist theorist Antonio Gramsci, and “the socialist movements used to kill anyone who was their enemy.”

When pressed further, he concedes that “it is not right to condemn 100 people to death when you’re trying to get one.”

Then why not speak out?

He continued to dodge the question, saying that Islam forbids such slaughter of innocents.

“We were fighting a war and that is not wrong in itself, sometimes there are going to be crimes committed,” he said.

“In a military sense it is normal. … The government is killing innocent people on the other side as well. So it’s not right … war allows for unbelievable things to happen.”

Understanding Aweys today means going back to 2006. Mogadishu was a completely different city.

There were only a few flights a week and the airport runway was a concrete strip marred by the carcass of a crashed Russian plane. Just a handful of Westerners travelled to the capital during the Islamic Courts Union’s six-month rule, as it was almost impossible to arrive without the group’s prior permission.

Foreign passports were stamped at the airport with a “visa” that cost US$250, even though the ICU was not an official government. Luggage was thrown in pile on the tarmac so men with metal detectors could conduct a symphony of beeps and squeals, although they didn’t actually open any of our bags.

Today, flights come and go throughout the day and passengers enter a pristine airport, with functioning metal detectors and luggage belts, shining like a lounge for Dubai’s Emirates Airlines rather than a typical East African terminal.

Throughout my interview in 2006, Aweys, felled by the flu and listless during his Ramadan fast, mainly answered questions with questions. Most critically, it was hard to determine what influence he exerted over the ICU leadership, whose other members were considered moderate.

But the most surprising aspect of our visit to Mogadishu was not that Aweys agreed to an interview or what he said, but that Mogadishu looked nothing like we expected.

The idea was to write the Taliban of Africa story, but what we found was different. Somalis, weary of war, were ready to give the ICU a chance. The group had done what no power before had managed since the collapse of the government in 1991 — overcome clan politics and the never-ending fighting of rich and corrupt warlords.

In a country awash in weapons, there were few AK47s on the streets. There was cautious optimism. There was a chance for diplomacy and negotiations.

Aweys at the time told me that the ICU should be given “a chance.”

Two months after our interview, Ethiopia invaded Somalia with implicit U.S. support to oust the ICU — one of the most catastrophic foreign policy decisions in Somalia’s history. Somalis rose to defend their sovereignty against longtime rival Ethiopia. A small militant youth movement within the ICU known as Al Shabab grew to a fighting force during the two-year bloody war.

When Ethiopia was eventually pushed back across the border, Al Shabab, hardened by war and pumped up on power, could not be contained. It turned their nationalistic agenda into a global one

Former ICU leader Sharif Sheikh Ahmed was appointed the country’s president. Then-U.S. secretary of state Hillary Clinton shook his hand at the United Nations and said he was the “best hope” for Somalia in a long time.

Essentially, two years of war and thousands upon thousands of deaths served only to keep the same man in power.

In 2010, Al Shabab officially pledged allegiance to Al Qaeda and was listed by governments worldwide as a terrorist group. On Dec. 23, 2010, Aweys, who had fled to Eritrea during the war, merged his Hizbul Islam faction with Al Shabab.

Terrorism is often, especially after the Sept. 11, 2001, attacks and again today, regarded in black-and-white terms. Terrorist or not. As George W. Bush famously said, you’re with us, or with them.

The reality is never so obvious when put in context.

Interviewing Aweys today is as frustrating as it was 10 years ago. He is verbose, but says little. The only clear fact is that he believes a strict, literal interpretation of sharia, or Islamic, law should govern Muslim countries.

Aweys told me he doesn’t support Daesh’s incursion into Somalia or its members’ nihilistic attacks on the West, but spoke glowingly of Abu al Baghdadi’s declaration of a caliphate in Syria and Iraq in a fashion that was similar to his praise of Osama bin Laden’s vision a decade ago.

But unlike many hardliners he does not rule out the possibility of Western alliances, whether they are political or financial. During our interview he name dropped various diplomats he had met, such as the European Union human right’s adviser. Most hardliners would also not surrender even if their lives hung in the balance.

Until he renounces his past though, he will not be given amnesty as other high-profile Shabab defectors have, along with hundreds of foot soldiers.

At the end of the interview I ask him if he’s the same person I interviewed a decade ago, or if experience had changed him.

Aweys hesitated and then looked at the translator: “She can decide that for herself.”

1993 U.S. army Rangers are killed when Somali militias shoot down two US helicopters in Mogadishu.

2010 Al Shabab announces alliance with Al Qaeda and launches a major offensive in the capital.