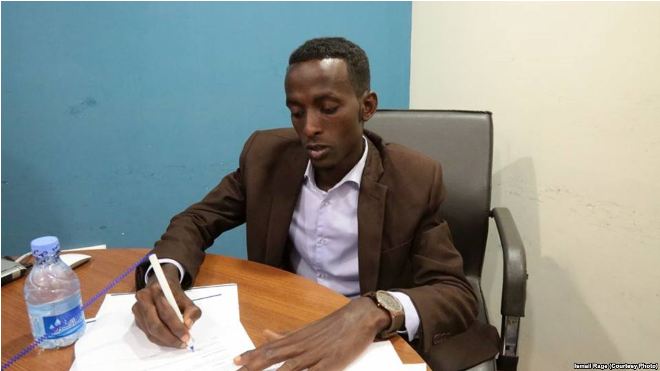 Somalian Ismail Rage, 22, graduated from Simad University in Mogadishu with a bachelor’s degree in banking and finance. Rage, who is paralyzed after a bout with polio as a child, became a media sensation in Somalia, where people with disabilities are often excluded from mainstream society.

Mogadishu has suffered more than two decades of war, and many of its young people were born and raised alongside violence and bloodshed.

Children with disabilities, however, face added risks of abandonment, neglect and lack of equal access to basic human necessities.

But Ismail Rage, 22, did not let his disability keep him from his goal of graduating from Simad University in Mogadishu. He received a bachelor’s degree in banking and financing on Wednesday.

As a child, Rage developed polio, which paralyzed his legs.

“Being a person with disability who was born and raised in a war zone, my dream was to attain such an achievement over the years,” Rage told VOA’s Somali service, adding that amid “financial and security challenges in Somalia, I have finally and fortunately” realized his dream.
Living in Somalia has many challenges for a disabled person, including being excluded from mainstream society. Many see only the limits of disabled people, not their opportunities.

Rage’s parents were among a few who dared to face the social stigma by sending their disabled children to the only available private schools.

“When I was just 3 years old, I was diagnosed with polio. My parents had been perplexed about what to do with both my legs paralyzed. At the age of 6, they sent me to Quranic school and then to private school within a few years,” Rage said.

He survived the bullets and bombs that killed many other Somalis in the streets of Mogadishu. But, at times, he was forced to crawl to achieve his goal.

“I was always facing risks, crawling through the streets, and riding on public transports,” Rage said. “When people hear explosions or gunfire they run, but I would crawl to my nearest cover.”

He uses a wheelchair, but the streets of Mogadishu are too sandy to maneuver by himself, he said, adding that he would move along on his hands and knees to get to school.

Because of its rarity, Rage’s inspirational story dominated the headlines of Somali media outlets this week and has been widely circulated through social media.

Rage has received compliments from President Mohamed Abdullahi Mohamed, the community, other government officials and even other people with disabilities, who find him inspiring.

Rage said “disability is not inability,” and he is preparing for graduate school.

“I was contacted by the former Somali president, Hassan Sheikh Mohamud, who congratulated me and promised that he will financially sponsor my graduate degree,” Rage said.